Who Are the S.Koreans Who Praise the N.Korean Regime? 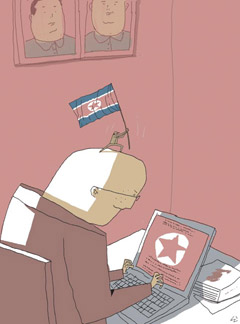 Some 70 South Koreans have been investigated by police for creating websites praising North Korea, which is against the law in the South. They range from a veteran passenger plane pilot who makes a six-figure annual salary to a worker at the Military Manpower Administration, lawyers and teachers. Who are these people who ignore evidence of massive incompetence, state brutality and inveterate belligerence in North Korea to declare their loyalty to the hereditary regime?

"Some of the people who praise the North Korean regime on the Internet are capable of following orders given by the North," a police spokesman claimed. "The 70 individuals being investigated this time have a true desire to praise the North and are not doing this simply out of curiosity."

According to experts, people who are not happy with South Korean society tend not to believe the news about North Korea. Because of their distrust in the South Korean system, they believe that they are merely being fed propaganda designed to discredit the workers' paradise.

Some say this type of activity should be viewed as a kind of mental illness. Kim Hong-jung, a professor of sociology at Seoul National University, said, "Since they're well aware of the reality facing North and South Korean society and have solid jobs in the South, their behavior could have resulted from an unrealistic and fantasy-driven fascination similar to people who worship Nazi uniforms and symbols."

Experts say people who have attained secure positions in South Korea yet praise the North tend to display sociopathic traits by hiding their unethical behavior and deceiving others about their objectives without any apparent qualms.

"They could suffer from multiple personality disorders," said Hwang Sang-min, a professor of Psychology at Yonsei University. The Korean Air pilot who was caught recently posting encomiums to the North Korean leadership "could have committed such acts because he failed to distinguish between his real self and his identity in cyberspace."